Song of the Far Isles – at a glance 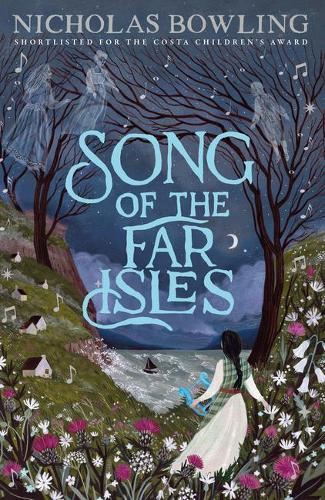 How many times have you heard someone say ‘music is my life’ or ‘I couldn’t live without my music’? In the world that Nicholas Bowling creates for “Song of the Far Isles” such claims are not exaggerated. The inhabitants of Little Drum are each born with a birth instrument that is an integral part of their character and everyone is defined by their musical ability. As the cover of this brilliant book explains, “on the far isle of Little Drum everyone lives and breathes music.” 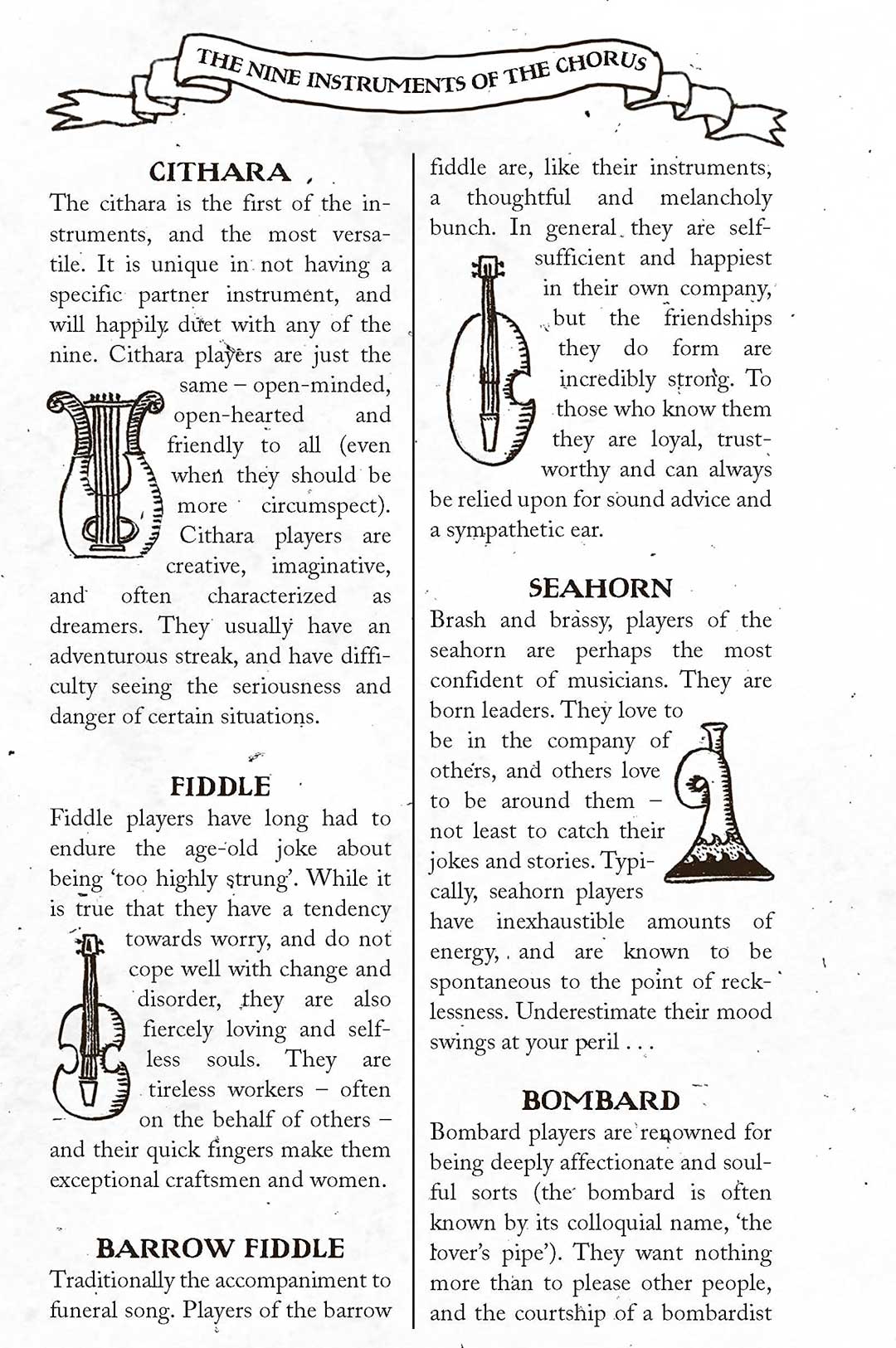 We first meet Oran, the fourteen-year-old heroine of the novel, as she steers her boat in a storm-threatened sea, from the Isle of Tusk to her home port on Little Drum. She knows she is in trouble as she is already late for her music date at the Broken Bottle Tavern and that the island has visitors from the Headland because a handsome three-mast frigate, “a swanky boat”, is tied up at the quayside. In this opening chapter we also meet members of Little Drum’s ghast community – deceased inhabitants of Little Drum who still play an important role in the life of the island, they are the soul of Little Drum.

The ghasts at the quayside tell Oran that the visitors in the swanky frigate are from the Headland and that they arrived on an ill wind. The omens are not good and by the end of chapter three the Red Duchess, the absentee ruler of The Far Isles, has made a decision that threatens the essence of Little Drum’s existence. The Duchess confronts the inhabitants of Little Drum in the Broken Bottle Tavern after Oran has completed her music performance which includes a song denouncing the ruler:

“Hark to the song of the Red Duchess
The fount of all the seas’ distress;
A cruel and murdering fiend, no less,
Her crimes too many to confess! ”

The Duchess responds with three pronouncements. The third one is the Bill of Quietude which will silence the island: “Effective immediately, my men will be enforcing the cessation of all musical activities and the confiscation of all musical instruments.” Predictably the Broken Bottle erupts and the plot of the novel, with all its amazing twists, turns and surprises is hatched. Oran learns of a mythical instrument that has the power to change hearts and minds and she begins her quest to find and play the instrument and change the Duchess’s mind. 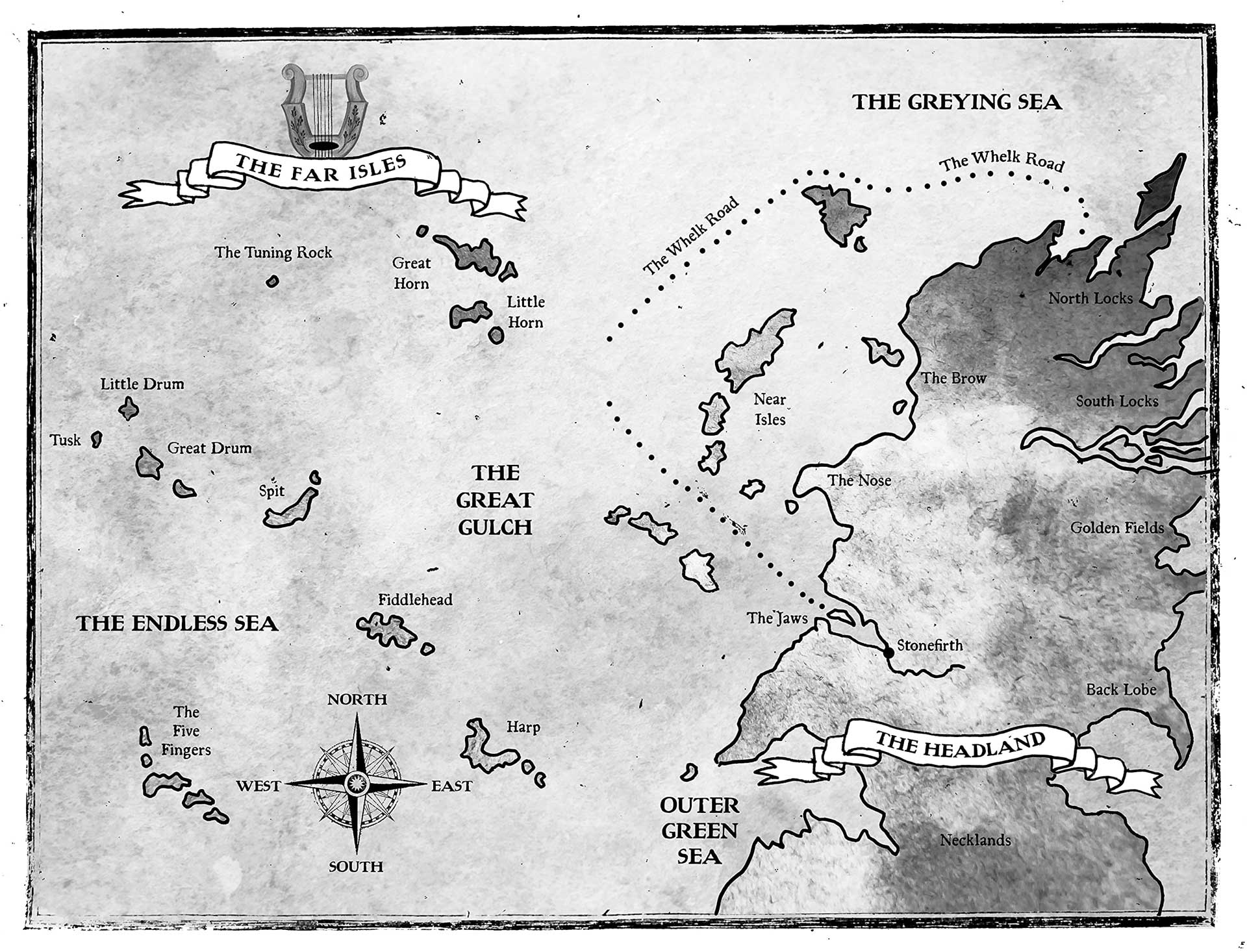 The importance of music and musical instruments in the book cannot be overstated. Oran’s instrument is the Cithara, a stringed lute-like instrument, which is the first and most versatile of the nine instruments that make up The Chorus on Little Drum. Cithara players are “open-minded, open-hearted and friendly to all … they are creative, imaginative and often characterized as dreamers … they usually have an adventurous streak, and have difficulty seeing the seriousness and danger of certain situations.” Oran has many opportunities to display all of these qualities as this thought-provoking and imaginative story unfolds.

Song of the Far Isles is a marvellous book. Nicholas Bowling leads the reader into a magical world in which the power of music is threatened but at the end, Oran is in her new boat approaching Little Drum but there is now no threat of a storm as she plays her cithara and nature and music are in harmony – “She heard a warm easterly breeze and matched its tune. It came to her, and filled her sail, and guided her towards the harbour like a careful, gentle hand.” – a beautifully calm and satisfying conclusion to the story.

Finally, the brilliant cover illustration and design by Olga Baumert and Steve Wells deserve to be mentioned. The colours, the shadow-like ghasts, Oran with her cithara and the Little Drum sea scape combine to create a picture that has a magical and calming effect that suits the story perfectly.

Click here to read an extract of Song of the Far Isles by Nicholas Bowling.

If you like Song of the Far Isles by Nicholas Bowling you might also like: The Time Traveller and the Tiger by Tania Unsworth, The Pear Affair by Judith Eagle, The Marvellous Land of Snergs by Veronica Cossanteli, By Ash, Oak and Thorn by Melissa Harrison and our roundup of the 2021 Carnegie Shortlist.