The Time Traveller and the Tiger – at a glance 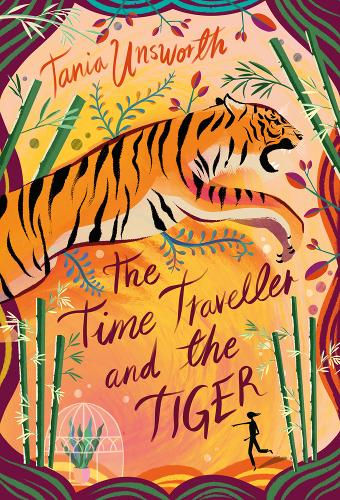 It might be difficult to write anything about Tania Unsworth’s brilliant story without revealing too much and spoiling it for you, but I’ll try.

Eleven-year-old Elsie is to spend a week of the summer with her great-uncle John in his big country house. It’s not something she is much looking forward to, but she is prepared to make the best of it. It soon becomes apparent that great-uncle John carries a sadness within him, something from the distant past. Elsie often finds comfort imagining herself to be Kelsie Corvette, her more adventurous alter-ego.

Then one morning, Elsie finds herself transported back to 1946, to India before independence from Britain and face to face with her great-uncle, aged only twelve.

I won’t tell you how this happens; if there’s a literary prize for the most original idea for a time-portal device in a novel aimed at eleven-to-fourteen-year-olds, then Tania Unsworth should win it hands down. The scene facing her when she arrives is described with startling economy:

Everything was the same. Except there was more of it.

They set off on a series of adventures, also involving Mandeep, the son of one of the servants in John’s household, and a fourth nameless presence, a tiger. There are dangers, escapes and rows, all played out against a backdrop of tension and doubt: will they survive, and who is this person really, apparently dropped in from nowhere? Towards the climax of the story, as they confront the organiser of a scam taking money from tourists conned into hunting deliberately-drugged tigers, Elsie (who has been calling herself Kelsie) tells John who she really is.

I found this one of the most intriguing parts of the story. How will all this resolve itself when the present-day is re-established? What will have changed? Will John remember Elsie? You will find solutions absorbing and satisfying.

The true hero is the tiger, the huge mysterious presence in the story and the mainspring of its action. The author treats it with reverence and describes it in impressively stately language:

….he had simply walked into the meadow, moving in the way of all tigers, each massive paw placed outer-edge first, each step a decision. The weight of his long body shifting as easily as ocean swell.

The night brought weight to the forest, turning the meadows and groves into solid blocks of darkness. Only the tiger was immune. The denser the shade, the more insubstantial he seemed to become, until he was as grey as smoke and almost as transparent.

The bond between the tiger and his prey ran deep. He knew (it) as well as he knew himself.

The final section is called Join The Fight. Here we learn that fewer than 4000 tigers remain in the wild. They are constantly threatened by hunters and commercial pressures seeking to destroy their habitats. There is a list of organisations that are trying to put things right before it’s too late.

Many thanks to Zephyr books for the review copy.

If you like The Time Traveller and the Tiger you might also like: Adventure in Athens by Caroline Lawrence, Time School by Nikki Young, Another Twist in the Tale by Catherine Bruton,  or our recommended books for year 5.