White Fox in the Forest – at a glance 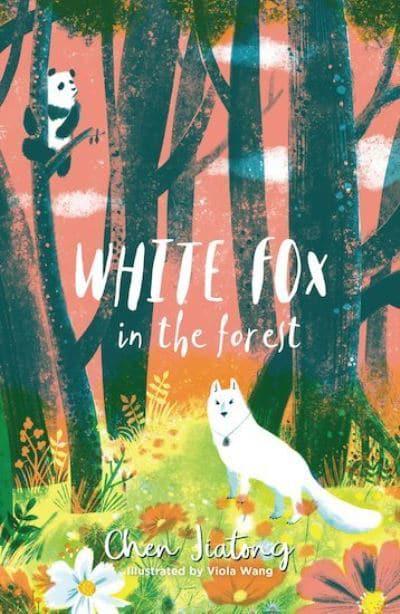 What does it mean to be human?

In this sequel to the highly successful White Fox we follow the journey of Dilah, the white fox, and his animal friends as they follow the light of a moonstone to what they hope will be enlightenment and reincarnation. In the final chapters of the novel Chen Jiatong presents the animals with a series of tests that are designed to help them, and us, discover five key attributes of humanity – kindness, courage, faith, love and wisdom.

“It was as though death were a fanged spider, unfurling its web and quietly awaiting them, luring them in with a dazzling, enticing treasure right in the middle of the web.”

Three old friends – Dialh (faith), Ankel – a weasel (wisdom), Little Bean – a rabbit (kindness) are joined on their quest by Tyrone – a panda (love) and Egg – a seal (courage). But these are not magical or fantastic beasts, they are very ordinary creatures and Chen Jiatong brings these everyday animals to life with human characteristics, and with all the fears and foibles that humans display, by the power of his writing.

Whilst reading the book I was reminded of John Bunyan’s “Pilgrim’s Progress” and allegorical associations are strong throughout the story. There are many temptations –“It was as though death were a fanged spider, unfurling its web and quietly awaiting them, luring them in with a dazzling, enticing treasure right in the middle of the web.” The power politics of the white fox and red fox clans and their attendant treacheries are revealed as the animals search for the Enchanted Forest and the Spring of Reincarnation and, like Christian in Bunyan’s epic parable, there are perils, trials and tribulations galore.

“The birds gently roused them from their dreams with sweet, drawn-out songs. Warm sunshine cascaded down like a waterfall, the leaves glistening with beads of dew.”

The natural world is a powerful force in the story. The enchanted forest, as its name suggests, is a place of mystical secrecy – “The three friends shivered, their bodies instinctively sensing a formidable force oozing from the forest. It felt as though some sort of magic had dissolved in the air, brimming with endless mystery – as if the forest was an ancient creature containing a bellyful of stories and secrets.” It can be a place of warm security and pleasure – “the birds gently roused them from their dreams with sweet, drawn-out songs. Warm sunshine cascaded down like a waterfall, the leaves glistening with beads of dew.” This world is also a place of deadly danger, there is a graphic description of a fight between Tyrone the panda and a malevolent tiger intent on killing the animals, and each of the friends are forced to face their own demons before their story is complete.

“I will be one of those humans …who protect the environment, animals and resources. If I’m human, I’ll have more power to do good in the world.”

The only humans to appear in the book are some hunters (bad news) and, fleetingly, the indulgent mistress of two, pampered pet cats. However, chapter three is devoted to the hilarious description of an animal beauty pageant which is pointed in its barbed criticism of pointless human stuff and nonsense. Dilah’s fluffy white coat wows the crowd and he wins the pageant by default as his closest rival, Blaine, a magnificent, strutting green peacock, decides to quit the competition as the standards are so low this year!

But this book is all about what it is to be human and the adventure may be seen as an instruction manual on how to live and behave in this wonderful world that we share with animals and nature. It is about treasuring this world and teaching ourselves how to conserve it for all of its inhabitants. Dilah and the others are seeking reincarnation to be transformed into humans and in reply to the accusation that humans are destroyers – “They’ve scarred and battered the entire earth … they desecrate the gift of nature with crime, murder and war.” Dilah responds – “I will be one of those humans …who protect the environment, animals and resources. If I’m human, I’ll have more power to do good in the world.” Let’s wish him every good fortune!

The story’s conclusion is very powerful and the animals achieve wisdom through their seeking and celebration of faith, kindness, love and courage. It is a great story about a group of friends who look out for each other as they follow the commands and directions of the moonstone which guides their destiny and It is a tribute to Chen Jiatong’s great skill that we are able to appreciate the story on so many parallel levels whilst still enjoying the adventure.

Many thanks to Chicken House Books for the review copy. Here’s a sample extract of White Fox in the Forest.

If you like White Fox in the Forest by Chen Jiatong you might also like: By Ash, Oak and Thorn by Melissa Harrison, Hello, Universe by Erin Entrada Kelly, Darwin’s Dragons by Lindsay Galvin, The Time Traveller and the Tiger by Tania Unsworth, The Marvellous Land of Snergs by Veronica Cossanteli, The Boy Who Dreamed of Dragons by Andy Shepherd, and our list of recommended year 5 books.