Thunderbolt – at a glance 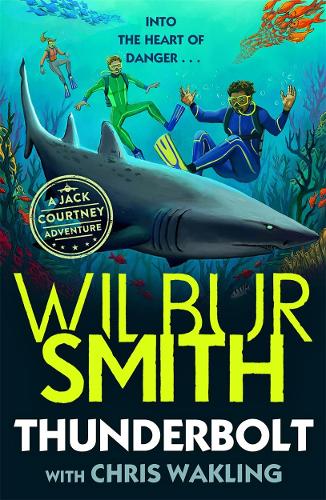 The Piccadilly Press cover tells us what to expect inside ‘Thunderbolt’: Pirates, Treasure, Child Soldiers, but this hardly does justice to the great plotting and sinewy prose of the second Jack Courtney adventure. As you might expect from a Wilbur Smith novel the plot is clever and the pace of the storytelling is fast, but never so frantic that you cease to believe in what is happening to the characters. The movement of the plot is measured and the many twists and turns are carefully planned so that they are in line with the capabilities of our fourteen-year-old heroes.

This book is the sequel to ‘Cloudburst‘, the first Jack Courtney adventure, which is set in The Democratic Republic of Congo and where we are introduced to Jack’s family and his best friends Amelia and Xander. ‘Thunderbolt’ takes us to Zanzibar with its “white beaches, turquoise sea, cloudless skies and jaunty palm trees” and where Jack’s mother is engaged in on-site research into coral conservation.

In the first few chapters, the building blocks of the book are established: the tight bonds which keep the three friends together, the contrasts between the often desperate lives of children in Africa and the privileged position of the British teenagers, the tensions which exist between Jack and his mother since the death of Jack’s father in the previous novel and the question of who can be trusted when the friends are captured by Somali pirates and transferred to a militia training camp for child soldiers. These blocks are developed with the skilled confidence that you might expect from an author who is estimated to have sold over 130 million books worldwide over his incredibly successful storytelling career. Add the assistance of Chris Wakling, a successful novelist and travel writer, and you have a cast-iron winning formula.

Although this book is aimed at and suitable for an upper Key Stage 2 / Key Stage 3 audience, the writing is more young adult in that it pulls no punches when describing the physical and emotional difficulties that challenge Jack and his friends.

Jack’s mother has hired Pete Saunders and ‘Thunderbolt’, his appropriately named boat, to facilitate the teenager’s daily diving expeditions. When Jack, Amelia, Xander and Pete are lured into a trap by going to the aid of a cabin cruiser, the team are left in no doubt that they are the ones in very serious trouble:

“With the two boats at a virtual standstill beside one another, two men leaped up above the cabin cruiser’s rail. Each had a machine gun. The sea around us exploded with foam as both men unleashed a stream of bullets into the depths.”

The emotional tensions that exist between Jack and his mother are handled deftly, allowing the reader to experience the story through Jack’s eyes, but also gives us access to the more complex world of his mother:

“An electric pulse went through me as she said that. It connected the dots, just for a second, and I did not like the shape they made one bit. Mum, seeing the pained realisation in my face, started talking quickly, wanting to head it off no doubt, but in fact making everything worse.”

Throughout the novel vivid descriptions capture scenes with controlled assurance. Early in the book, when they are diving underwater to search for hidden treasure with their metal detectors, the friends disturb a shoal of fish: “A cloud of tiny orange fish, sparks flung from an angle – grinder, shot past us as we started…”

But it isn’t all sweetness, light and nice orange fish. The pirates move the captured teenagers to a new location and Jack describes the sack that is used on him as a hood: “Now that I couldn’t see, my other senses pressed in. The horrible fish-stink of the bag blotted out everything else smell-wise. I swear I could taste bad fish.”

The book starts with the teenagers diving for lost treasure in almost idyllic conditions in the seas off the beaches of Zanzibar and concludes with a letter from the mystery man who saves Jack and his friends from the terrors of their kidnappers and their ransom demands. In the final few pages, most of the loose ends are tied up to everyone’s satisfaction but the letter adds the final twist to a plot that we know is going to lead us into the third Jack Courtney adventure ‘Shockwave’, which will be published next year

‘Thunderbolt’ is a cleverly woven piece of fiction. The authors have succeeded in creating a realistic and page-turning adventure that will excite its KS2 and KS3 readers but also, hopefully, make them think critically about the world in which they are growing up.

Wilbur Smith will be donating 20% of the profits of each copy sold to The Wilbur & Niso Smith Foundation which supports projects to improve literacy through adventure writing.

Many thanks to Piccadilly Press for the review copy.

If you like Thunderbolt by Wilbur Smith with Chris Wakling you might also like: Robin Hood – Piracy, Paintballs and Zebras by Robert Muchamore, Adventures in Athens by Caroline Lawrence, The Pearl in the Ice by Cathryn Constable,  The Big Green Activity Book by Damara Strong, and our list of recommended year 6 books.