Home » Children's & YA book reviews » Can You Whistle, Johanna? by Ulf Stark and Anna Höglund

Can You Whistle, Johanna? – at a glance

I want to avoid using the words ‘charming’ and ‘touching’ when writing about this astounding story.

It is both of these, but it is also, I think, a profound and moving meditation on the things that remain constant and permanent throughout our lives.

Ulf, the narrator, tells his friend Berra about his grandfather (who may be imaginary.) Berra doesn’t have a grandfather of his own, but Ulf says he knows where he can get him one: the local old people’s home. ‘There are lots of old men in there.’

So they wander inside and push open a door.

An old man was sitting inside, playing cards at a table.
‘That’s him,’ I whispered in Berra’s red ear. ‘He looks old
enough, don’t you think?’

Ned becomes Grandpa Ned almost immediately and the three of them start to hang out together and learn about each other’s lives.

The title refers to Ned’s attempts to teach Berra how to whistle a tune called ‘Can You Whistle, Johanna ?’ Johanna was Ned’s wife and he keeps a picture of her in his room. 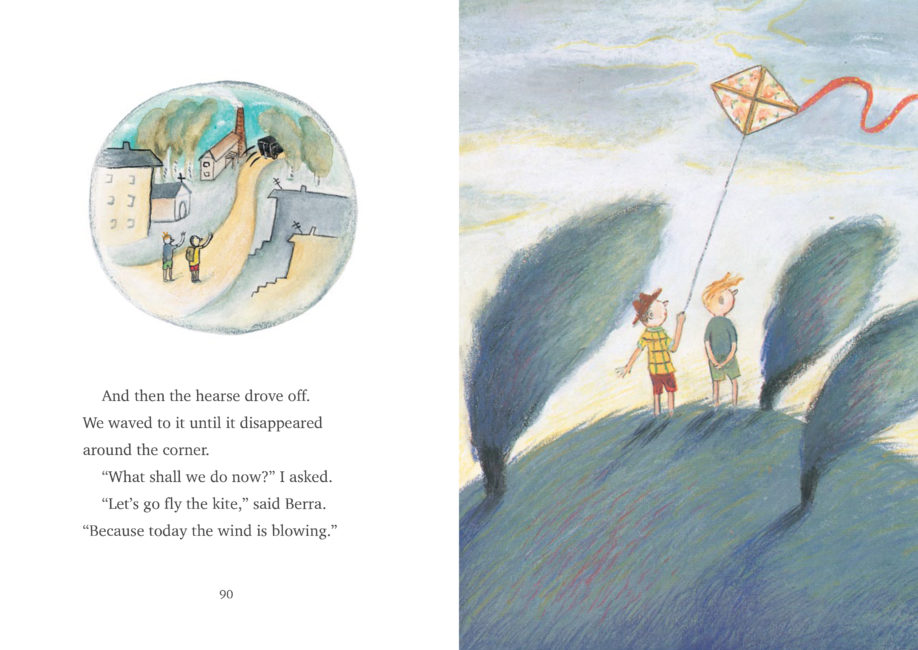 There are so many ingenious details in this story. My favourite is that both Berra and Ned have plasters on their chins; Berra because he cut himself playing on a see-saw with Ulf and Ned because he can’t stop his hand shaking while shaving.

It would be difficult to imagine the whole creation without Anna Höglund’s bold and funny illustrations, so closely integrated are they to the spirit of the story.

I learnt from the blurb on the cover that here is an animated film which is played on Swedish TV every Christmas. It might be worth nagging the BBC or Channel 4 to do the same. They could put in out just before The Snowman.

Many thanks to Gecko Press for the review copy.

If you like Can you whistle, Johanna? you might also like: Poems the Wind Blew in by Karmelo C. Iribarren, Daydreams and Jellybeans by Alex Wharton, On the Move by Michael Rosen, When It Rains by Rassi Narika and The Girl Who Learned All the Languages of the World by Ieva Flamingo.