The Magician’s Map – at a glance 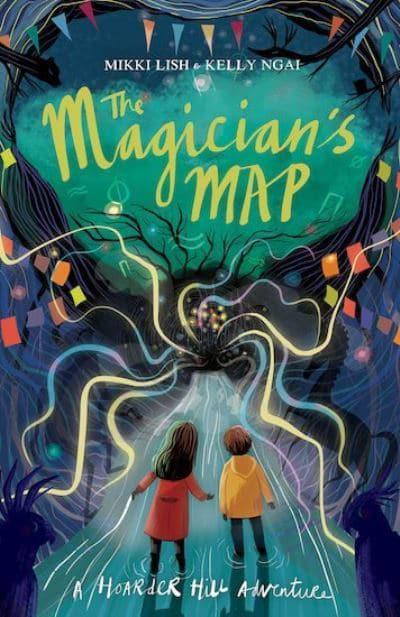 “Those who don’t believe in magic will never find it.” – Roald Dahl

Any number of magical quotations would have served to introduce a review of this fantastic book but Roald Dahl hits the nail right on the head – you simply have to believe and your reward will be a great story full of magic, mystery and subterfuge. The Magician’s Map is the follow up to The House on Hoarder Hill where we are introduced to thirteen-year-old Hedy, her younger brother Spencer, their cousins Angelica (Jelly) and Max and their Grandpa John and Grandma Rose.

Grandpa John was once a powerful magician but has retired from the world of active sorcery and is trying to lead a life of peace and quiet in the village of Marberry’s Rest. The peace and quiet is shattered when the children come to stay for an autumn holiday and Grandpa John receives a special invitation to attend a magic convention known as the Fantastikhana. Needless to say, the cousins use all their powers of persuasion to ensure that they are able to join him at this three-day jamboree of magical arts and crafts.

The Magician’s Map opens with a fabulously chaotic game of aerial tag involving flying children, stone gryphons, ninjas and talking bear rugs. All great fun but nothing in comparison to the fantastic action that awaits them at the Fantastikhana. Despite Grandpa John’s misgivings, all is arranged and it is agreed that the cousins and Grandpa John and Mrs Pal, the owner of the local magic shop, will go to the magic festival.

Entry to this mesmerising new world is through a flight of steps near to Mrs Pal’s shop – “One by one, the stairs changed. They began to sink into the earth, reversing their rise, so that instead of a staircase leading upwards to another street, it became a staircase dropping down towards a very dark tunnel.” And so the amazing adventure begins leading the children and the reader into parallel worlds that are enticingly scary and full of mind-warping surprises.

The story is based upon the discovery of a ‘real, living moored map’ that embeds itself, in the form of a three-dimensional tattoo, into Hedy’s skin. The senior magicians at the Fantastikhana, collectively known as The Sleight, are determined to gain possession of the map but the map tattoos will only reveal themselves to members of Hedy’s bloodline family, via a magic mirror that Grandpa owns. The whole living map business is brilliantly handled by the authors – the living map concept, the revealing and the consequences of the unmooring constitute a feat of imagination worthy of real magicians. Mikki Lish and Kelly Ngai are truly masters of magic!

Hedy is led by the compulsive power of the map and she and Jelly follow a path that leads to a dangerous hunt for the parts of a long lost loom that can weave through time.

“The full history of Verlandi’s loom is lost….but it was created to make changes to the past, suspend the present, or change the future.”

We are reminded by Grandpa John that every one of those options is dangerous. To follow the map’s directions the children have to manoeuvre their way through Slips that link different worlds and times and they keep in touch with the rest of their group with telejotters. Add into the mix that throughout the treasure hunt it is very difficult to know who is to be trusted and you have a recipe for magical mayhem that is genuinely thought-provoking and wonderfully imaginative.

The brilliant cover and design by Maxine Lee and Steve Wells deserves to be mentioned. The colours, the shadows and the shapes create a fluid picture that has a strangely hypnotic, almost optical illusion, effect which suits the story perfectly.

The book opens with a poem by Emily Dickinson:

“In this short Life that only lasts an hour

How much – how little- is within our power”

I am very happy that my time reading “The Magician’s Map” was time well spent and it is within your power to experience and enjoy the magic. My advice is – don’t hesitate!

Many thanks to Chicken House Books for the review copy. Here’s a sample extract of The Magician’s Map.

If you like The Magician’s Map by Mikki Lish and Kelly Ngai you might also like: By Ash, Oak and Thorn by Melissa Harrison, Hello, Universe by Erin Entrada Kelly, Picklewitch & Jack and the Sea Wizard’s Secret by Claire Barker, Emily Windsnap and the Pirate Prince by Liz Kessler, The Marvellous Land of Snergs by Veronica Cossanteli, The Boy Who Dreamed of Dragons by Andy Shepherd, and our list of recommended year 6 books.