Lori and Max and the Book Thieves – at a glance 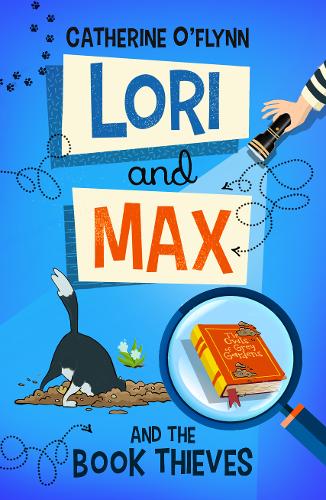 In the newly-reopened Birmingham Art Gallery you can see a large picture by Cold War Steve. It’s a surreal image of the city centre and is peopled by notable cultural figures from the city’s recent past.

Catherine O’Flynn is one of them. She has been a leading light in the city’s literary scene for many years now. I read two novels of hers, What Was Lost and The News Where You Are when they came out, in 2007 and 2010. Both were skilfully-constructed, thoughtful tales set in the Midlands. Both had me laughing out loud at various points, something I do very rarely.

This book, aimed at youngsters aged 9-12, is the second outing for Lori and Max, twelve-year-old girls from New Heath (which I’m sure is Kings Heath in Birmingham.) Lori sees herself as a child-detective. Max is her (sometimes reluctant) occasional assistant. So often the usual plots involving ‘child-detectives’ are contrived and implausible, but here the information about the two cases they solve is subtly and fluently revealed, in a world which is recognisable and entirely believable; the two main characters, their backgrounds, their families, their teachers, their friends and their targets are all fully human creations.

Unusually, it is written in a split-narrative. Lori’s chapters are in the first person, but Max’s fears and problems exist in a third-person world, which Lori can never really enter. It’s a testimony to O’Flynn’s careful craft that you don’t notice this at first, and when you do it quickly recedes from the front of your attention.

Brummies have a peculiar sense of humour, which can probably only be fully grasped by fellow Brummies, or people who have lived here for at least seventy years. This story is studded, like glistening jewels, with observations, asides, snatches of dialogue and insights, which I recognise as coming from a true Brummie-brain, but which will also appeal to outsiders.

O’Flynn is an expert, practised artist. She is not interested in dashing off a draft for a film company to take up as a ‘treatment’ for a future project, probably involving a CGI fantasy. The final chapter in particular, which deals with emotions of great depth and complexity, and which is presented in a carefully-woven interplay of narrative, response and stagecraft, had me on the verge of tears and almost gasping with admiration.